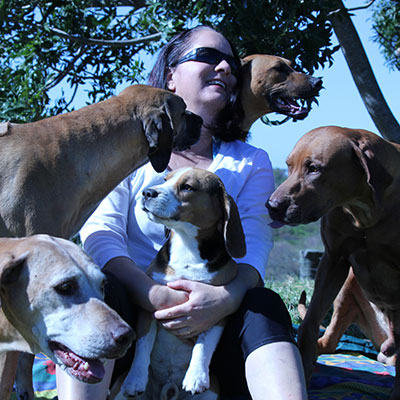 3 years ago, I was seriously considering returning to a Corporate career after having been at home for 12 years, farming and running kennels, both of which allowed me to raise my 2 children. At the same time, we had added a new pup to the home and he was raised on Pawsome Raw, which the breeder wanted us to continue with. At that stage Pawsome Raw was only available in Gauteng and logistics to the Eastern Cape were a complete nightmare.

Retha went out of her way to help me raise the pup with what was available here in East London, even though there was no financial benefit for her. After she sent me a cooler box of food with someone, I saw the difference in quality of the Pawsome Raw compared to what I was feeding and begged her to let me become her agent in the EC. But still logistics were a problem, and after a year we finally managed to sort it out and in June of 2017, I got my first 600kg of Pawsome Raw! Fast forward 2 years and we are selling over 2 tons a month in the region and growing every day.

I am eternally grateful for having been given the opportunity to buy the EC distributorship of Pawsome Raw, as it has enabled me to continue to have a part in my children’s lives as well as make a difference in the lives of pets in the Eastern Cape.

Through Pawsome Raw our aim is to reinvent how dog and cat owners think about, approach and meet their pets’ nutrition requirements; especially how to improve the probability that pets live longer and healthier lives through nutrition.

Facebook-f
We use cookies on our website to give you the most relevant experience by remembering your preferences and repeat visits. By clicking “Accept All”, you consent to the use of ALL the cookies. However, you may visit "Cookie Settings" to provide a controlled consent.
Cookie SettingsAccept All
Manage consent

This website uses cookies to improve your experience while you navigate through the website. Out of these, the cookies that are categorized as necessary are stored on your browser as they are essential for the working of basic functionalities of the website. We also use third-party cookies that help us analyze and understand how you use this website. These cookies will be stored in your browser only with your consent. You also have the option to opt-out of these cookies. But opting out of some of these cookies may affect your browsing experience.
Necessary Always Enabled
Necessary cookies are absolutely essential for the website to function properly. These cookies ensure basic functionalities and security features of the website, anonymously.
Functional
Functional cookies help to perform certain functionalities like sharing the content of the website on social media platforms, collect feedbacks, and other third-party features.
Performance
Performance cookies are used to understand and analyze the key performance indexes of the website which helps in delivering a better user experience for the visitors.
Analytics
Analytical cookies are used to understand how visitors interact with the website. These cookies help provide information on metrics the number of visitors, bounce rate, traffic source, etc.
Advertisement
Advertisement cookies are used to provide visitors with relevant ads and marketing campaigns. These cookies track visitors across websites and collect information to provide customized ads.
Others
Other uncategorized cookies are those that are being analyzed and have not been classified into a category as yet.
SAVE & ACCEPT
×